Should You Raise Money in the Next 12 Months? A Bull/Bear Valuation Calculator 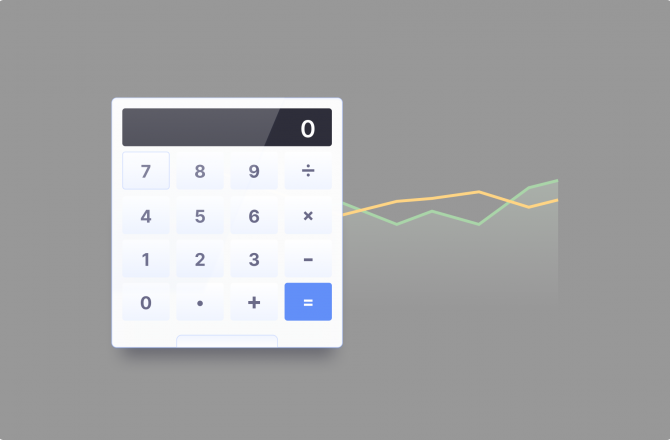 Jump straight to the calculator

During the Covid-19 pandemic—particularly in 2021—SaaS companies saw historical valuations and unprecedented levels of VC funding.

To give you an idea of how wild things got, consider this. There are currently 1,300+ unicorns, according to data from Crunchbase—600 of which were minted in 2021.

Fast forward a year later, and today’s valuations don’t seem to be keeping pace. Not only that, but VC funding has slowed down considerably.

As you’ve likely seen in headlines, economic uncertainty, fear of a recession, inflation, and other factors have led some of the top tech companies to see plummeting valuations.

This is understandably concerning if you’re a tech company with plans to raise money within the next 6-12 months.

So, where does that leave your company?

What type of valuation can you expect when you raise your next round?

Will you potentially have to raise a down round?

What considerations should you make before you raise?

We created a free calculator that will help you answer all these questions and give you a baseline for raising your next round.

With the calculator, you enter some basic information about your company (revenue, the funding round, revenue type, etc.), and you’ll see an estimated valuation, whether or not you’ll need to raise a down round, breakeven valuation date, and other critical data points.

If you want to jump right to the calculator, you can access it here.

However, we’d highly recommend reading the rest of this guide!

We’ll shed light on the current state of SaaS valuations, some considerations you need to account for, and a brief walkthrough of how to get the most value from the calculator.

The Current State of SaaS Valuations

According to data from Bessemer, a year ago, revenue multiples above 10x were the norm for SaaS companies. 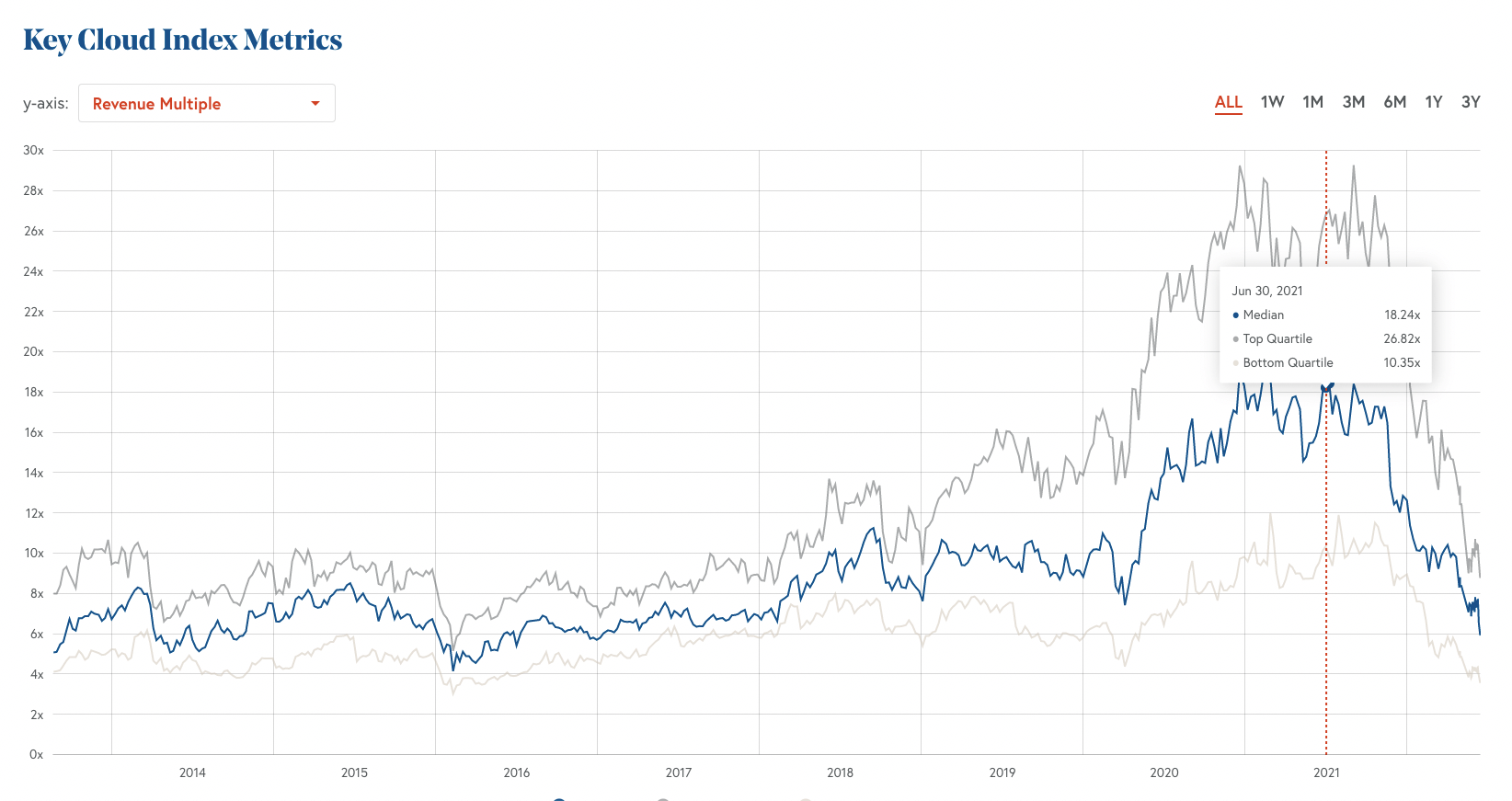 As you can see from the chart above, that’s no longer the case.

This might seem disheartening at first glance. However, as Jason Lemkin from SaaStr pointed out in a recent article, things may not be as bleak as they seem.

Jason points out that despite revenue multiples being below three-year lows and long-term averages, SaaS companies are still doing relatively well.

“Customers are buying more than ever.  Amazon AWS, Microsoft Azure, and even Google Cloud are on fire, adding insane amounts of revenue this year.  The top SaaS and Cloud leaders are even accelerating at $1B in ARR, for goodness sakes!”

Yes, valuations and revenue multiples may be lower than two years ago.

From 2018 to the beginning of 2022, the SaaS industry has been on an unprecedented run.

When you zoom out and take a macro view of where things stand today, it seems like the industry is trending towards 2018/2019 levels, far from the SaaSpocalypse scenario of 2016 (which the industry bounced back from, by the way). 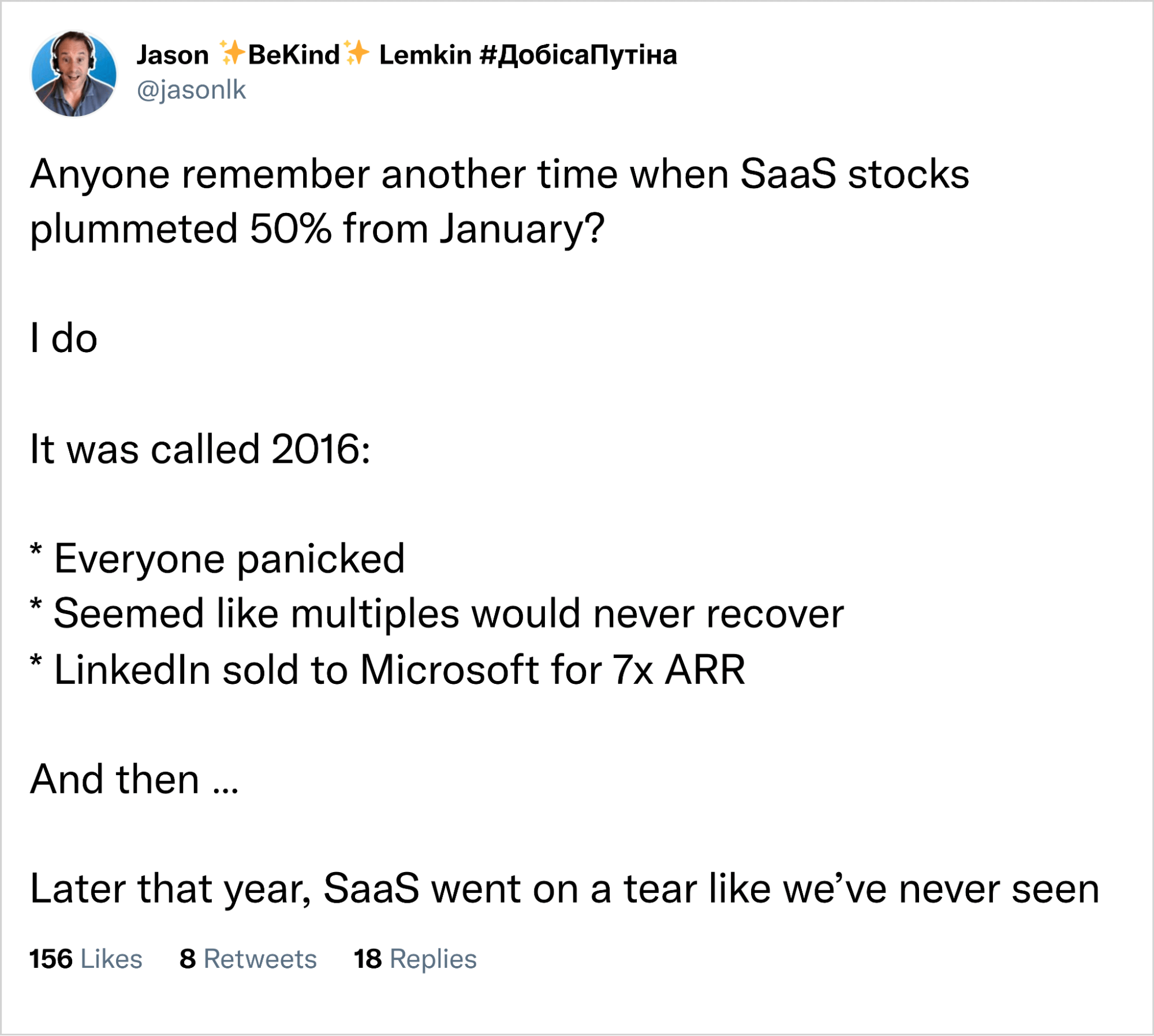 Does this mean that you can go and raise your next round?

Considerations For Your Valuation

Just because valuations aren’t at all-time highs anymore doesn’t mean you can’t (or shouldn’t) raise your next round.

However, it does mean that it’ll likely be more difficult, and you probably won’t get the same valuation you would’ve a year ago.

To help you gauge whether or not it makes sense to fundraise now and what kind of valuation you can expect, here are some considerations.

What Milestones Has Your Company Reached?

Investors want to see that you’ve reached certain milestones to feel confident about your progress and potential.

The milestones you should aim for depend on which funding round you’re seeking.

For instance, if you’re raising a seed round, some milestones you should aim for are:

You can see examples of milestones for other rounds in the screenshot below: 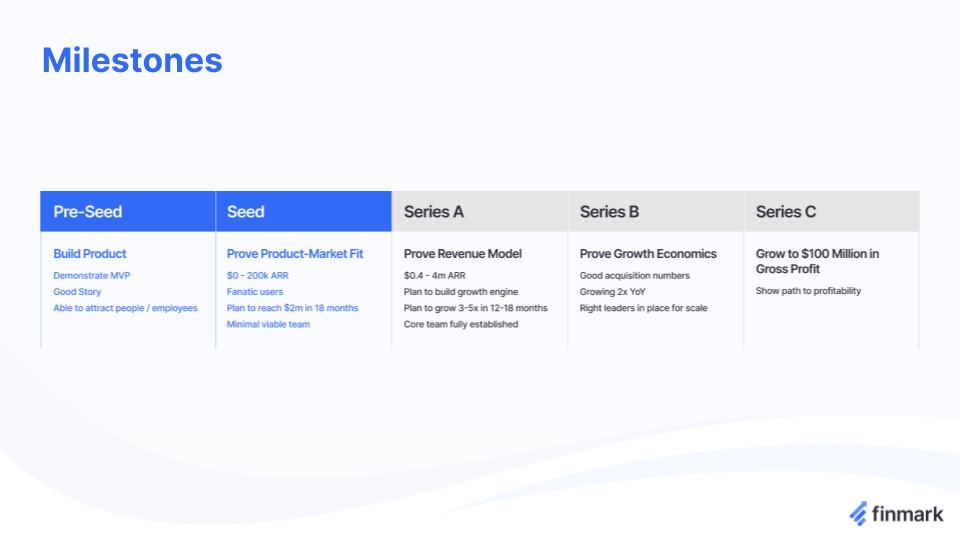 If your company has been stagnant since the previous round or isn’t showing signs of reaching the milestones for the next round, it may affect the valuation you receive.

Another important consideration in your valuation is your growth rate.

How fast are you growing? Is it comparable to startups of a similar size?

One of the benefits of our valuation calculator is it considers your revenue growth rate compared to historical averages for companies with similar revenue, which will save you from researching benchmarks and doing manual calculations.

What Revenue Multiple Can You Expect?

Going back to Jason Lemkin’s article, an essential piece of determining your valuation is your assumptions for what revenue multiples will be going forward.

The bear case assumes revenue multiples will fall back to pre-2018 levels.

The bull case assumes that revenue multiples will continue to grow at the same rates they were between 2017-2019, and essentially treats the highs and lows of the Covid years as abnormalities. 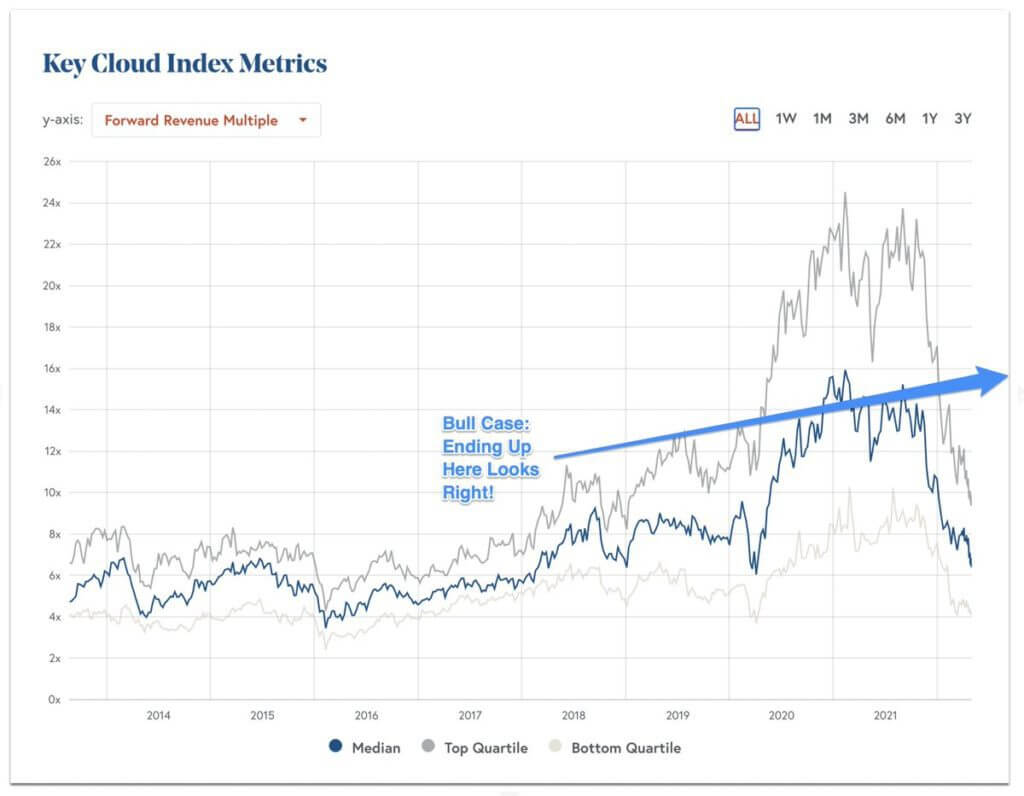 The rational case assumes that revenue multiples will level out to pre-Covid levels without the drastic growth pattern of the bull case. 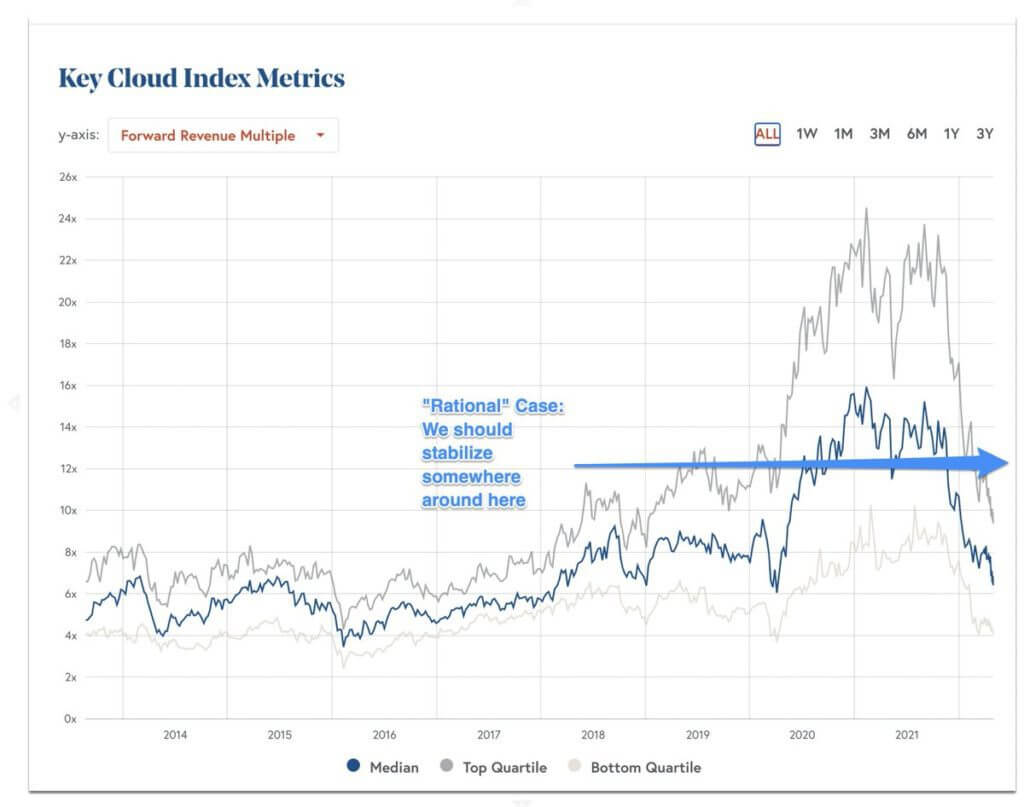 It’s impossible to say which scenario is the most likely. Jason’s view is also based on a longer term horizon than just the next twelve months.

In our methodology, we’re considering what valuations will look like for the next 12 months and therefore accounted for a more modest upper bound and a more drastic lower bound scenario than what Jason had described.

This gives you enough of a range to plan for a best and worst-case scenario and determine the likelihood of having to raise a down round.

Those are a few of the main considerations for your valuation. Our calculator automates a lot of this for you and considers several other factors. Let’s take a more in-depth look at how the calculator works.

How to Use The Valuation Calculator

We designed this calculator to be simple yet flexible. Here’s a quick overview of how it works.

Can Your Startup Weather The Storm?

This calculator is a great tool to help you prepare for what the future may hold.

However, if you have concerns about how to navigate turbulent times, the impact the economy will have on your ability to fundraise, or anything else, join us for our upcoming webinar: R.I.P. Good Times? Navigating Your Startup Through Uncertainty.

We’ll cover a wide range of topics, including:

We hope to see you there!

P.S. We want to give a special thank you to some people and companies that helped us create this calculator.

Thank you to Jason Lemkin of SaaStr for writing a great article about SaaS multiples, which was a big inspiration behind the idea for the calculator.

Thank you to Battery, Bessemer, and Pitchbook for their detailed data reports which we used in our assumptions for multiples for the calculator. 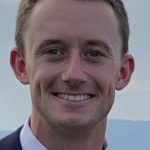 What is Financial Modeling?

Is your business growing, shrinking, or flat? When should you fundraise, and how much do you need? At your current pace, how…
Rami Essaid
Chief Executive Officer
19 March 2021 | Financial Modeling

Wanted Dead or Alive: The Importance of Runway

In business, you’re either growing or dying. A startup knows which path it is on by their runway.  Your runway refers to…
Finmark
17 September 2020 | Metrics & Reporting

How to Create a Startup Hiring Plan From Scratch

Creating a hiring plan is one of the most challenging things to do as a startup. You don’t have unlimited resources, and…
Dominique Jackson
31 May 2022 | Hiring