Every time a customer cancels or downgrades their subscription, your monthly recurring revenue (MRR) takes a hit. The percentage of MRR you lose each month is called revenue churn.

In order to withstand the ups and downs of startup growth, it’s important to understand what revenue churn is, how it impacts your business, and more importantly, how to reduce it.

In this article, we’re going to dive into everything you need to know about revenue churn.

What is Revenue Churn?

Revenue churn, also known as MRR churn, is the percentage of monthly recurring revenue (MRR) your company lost from downgrades and cancellations in a given period of time. It’s typically calculated monthly.

For instance, if you started the month with $100,000 MRR and lost $5,000 from customers who canceled or downgraded their subscriptions, you had a 5% revenue churn rate.

That’s a high level definition, but there’s a lot more to it.

While they’re very closely tied together, customer churn and revenue churn are not the same.

Customer churn measures how many customers you lose to cancelations. Revenue churn measures the amount of MRR you lost from those customers, plus MRR lost to downgrades.

It’s important to differentiate between the two because they can tell very different stories, particularly for SaaS companies that have multiple pricing plans. Losing 10% of your customers isn’t the same as losing 10% of your MRR.

For instance, consider a startup that has three pricing plans:

If I told you this company has a 5% customer churn rate, it wouldn’t be very telling. Because if that 5% came from the Starter plan, we’re talking about a $500 loss in MRR. But if the 5% customer churn was enterprise companies, that’s $10,000 in lost revenue, which is much more significant.

That’s why it’s important to account for both revenue and customer churn to get a full picture of what’s going on with your company’s churn.

Another nuance that comes with revenue churn is gross vs net. So far, we’ve mainly focused on gross revenue churn, which is the total monthly recurring revenue you lost in a given period.

What that number doesn’t take into account though, is the revenue that you gain from your existing customers, which is where net revenue churn comes into play.

Net revenue churn, also known as net MRR churn, is the percentage of monthly recurring revenue that your business lost in a given period net of the revenue that you gained through existing customers upgrading their plan or buying add-ons (this is called expansion MRR).

Now, let’s talk about how to calculate all these numbers.

How to Calculate Revenue Churn

We’ll break down the formulas for both gross and net revenue churn.

How to Calculate Gross Revenue Churn

In order to calculate gross revenue churn, you’ll divide your MRR lost due to downgrades and cancellations over a certain time period by your MRR at the end of the previous month.

How to Calculate Net Revenue Churn

Calculating net revenue churn is similar, except now you have to add in MRR you gained from existing customers.

Your MRR at the end of last month was $100,000. Throughout this month, you lost $4,000 in MRR to churn and downgrades. However, you gained $2,000 in MRR from customers upgrading their accounts.

The equation for your net revenue churn would look like this:

One interesting tidbit about net churn, is that it can be a negative number. This is one scenario where a negative metric is a good thing for your business.

If your expansion MRR is greater than your churned MRR, you’ll get a net negative churn rate. Let’s take a look at an example.

Your MRR at the end of last month was $100,000. And throughout this month you lost $2,000 MRR from cancelations and downgrades.

However, thanks to a customer marketing campaign you ran, you were able to get $3,000 in expansion MRR from customers upgrading their accounts!

When you plug these numbers into the net revenue churn formula, here’s what you get:

That means that your expansion MRR offset the MRR you lost from churn. Pretty amazing, right?

Why Revenue Churn is Important

We’ve touched on it a bit, but revenue churn is extremely important for a number of reasons, including:

You need to track both revenue churn and customer churn to get a full understanding of how much churn is costing your business.

In order to know how much cash you’ll have in six months, you need to forecast how much revenue you expect to lose to churn.

In Finmark, you can plan for different scenarios to see what’ll happen if your churn rate goes up or down. 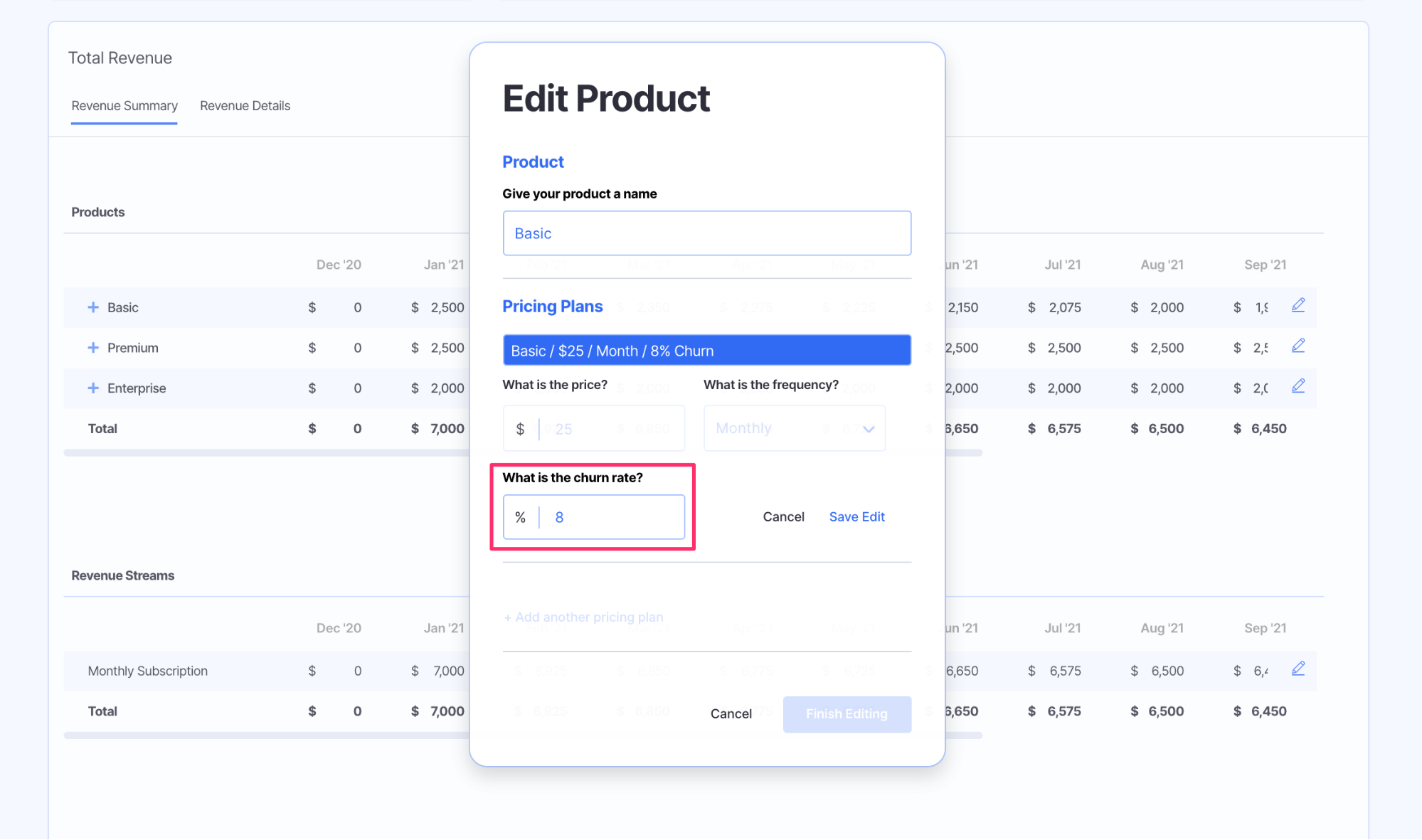 Based on your estimates, you can see how your revenue and runway will be impacted. Here’s a comparison of two financial model scenarios. One with a revenue churn rate of 1% (green) and one with 5% (red). 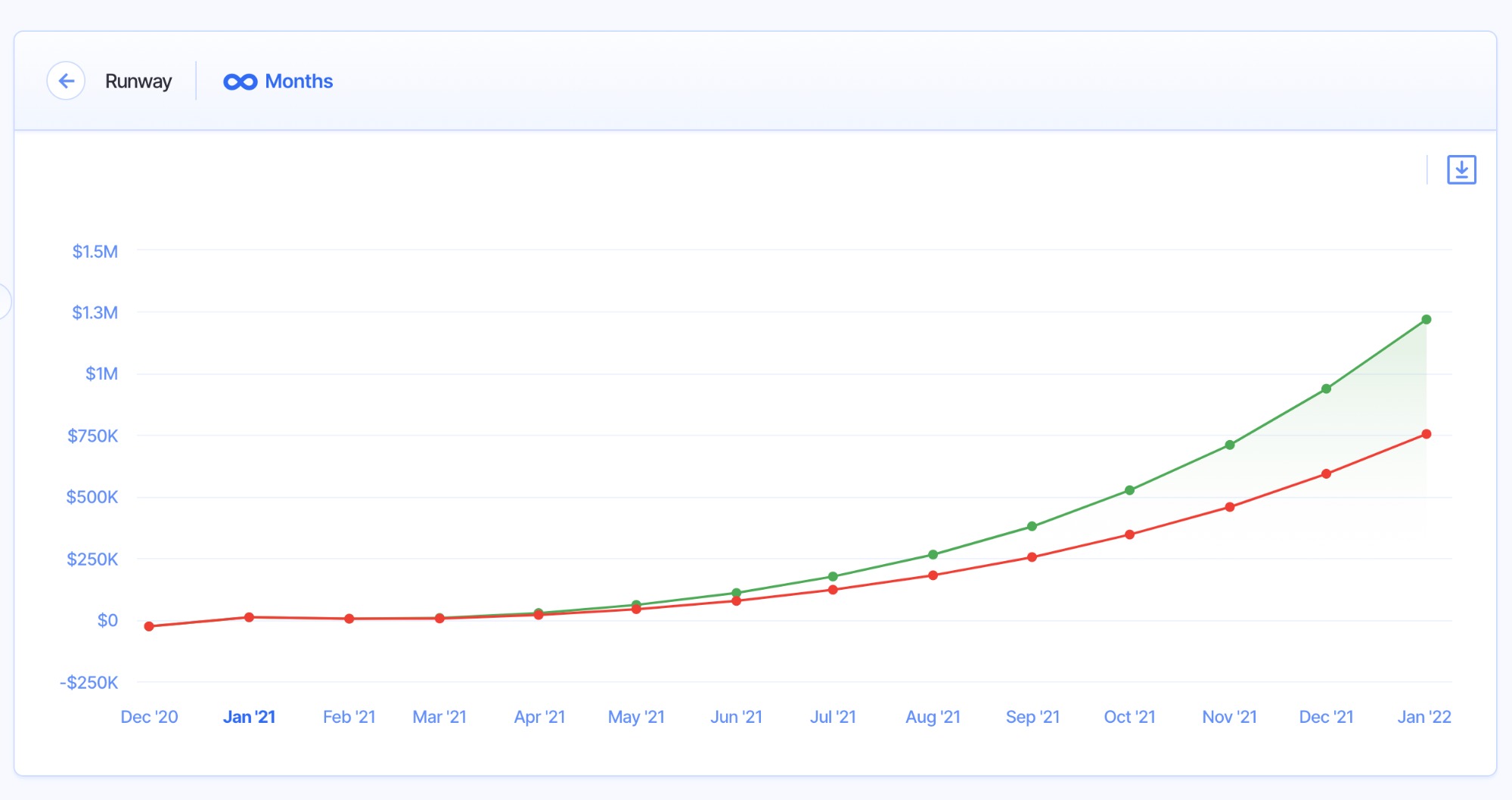 While both are experiencing growth, the green is growing at a much faster pace which puts them in a better financial position long term.

As you start to dig deeper into revenue churn, you’ll want to pay particular attention to where the churn comes from.

For instance, if you offer multiple price plans, is most of the churn coming from your lower, mid, or higher tier plans?

If most of the MRR churn is from lower priced plans, it could mean it’s priced so low it’s not attracting your ideal customers.

On the other hand, if the churn is mostly happening at your higher tier plans, you might look into how you can provide more value to justify the price to your customers.

Revenue Retention is Vital For Growth

Above all else, revenue churn tells you how good you are at retaining revenue, which is key for building a SaaS company or any startup with a recurring revenue model.

No matter how great you are at acquiring new customers, if you can’t retain them you’ll eventually run out of cash.

Again, this is where building a financial model can come in handy. Build a model that lays out your best case scenario as well as a downside scenario so you can prepare for anything that comes up.

Wondering how your revenue churn stacks up to other startups? Since there are so many variables to consider (pricing, customer retention strategy, budget, and more) it’s hard to say what a “good” revenue churn rate is.

But there is some data that might be helpful.

Profitwell analyzed revenue churn by company age, price point, and a couple of other variables.

They found that there isn’t a strong correlation between MRR and revenue churn.

One correlation their study did find though, is that the longer a company stays around the lower their average revenue churn tends to be. 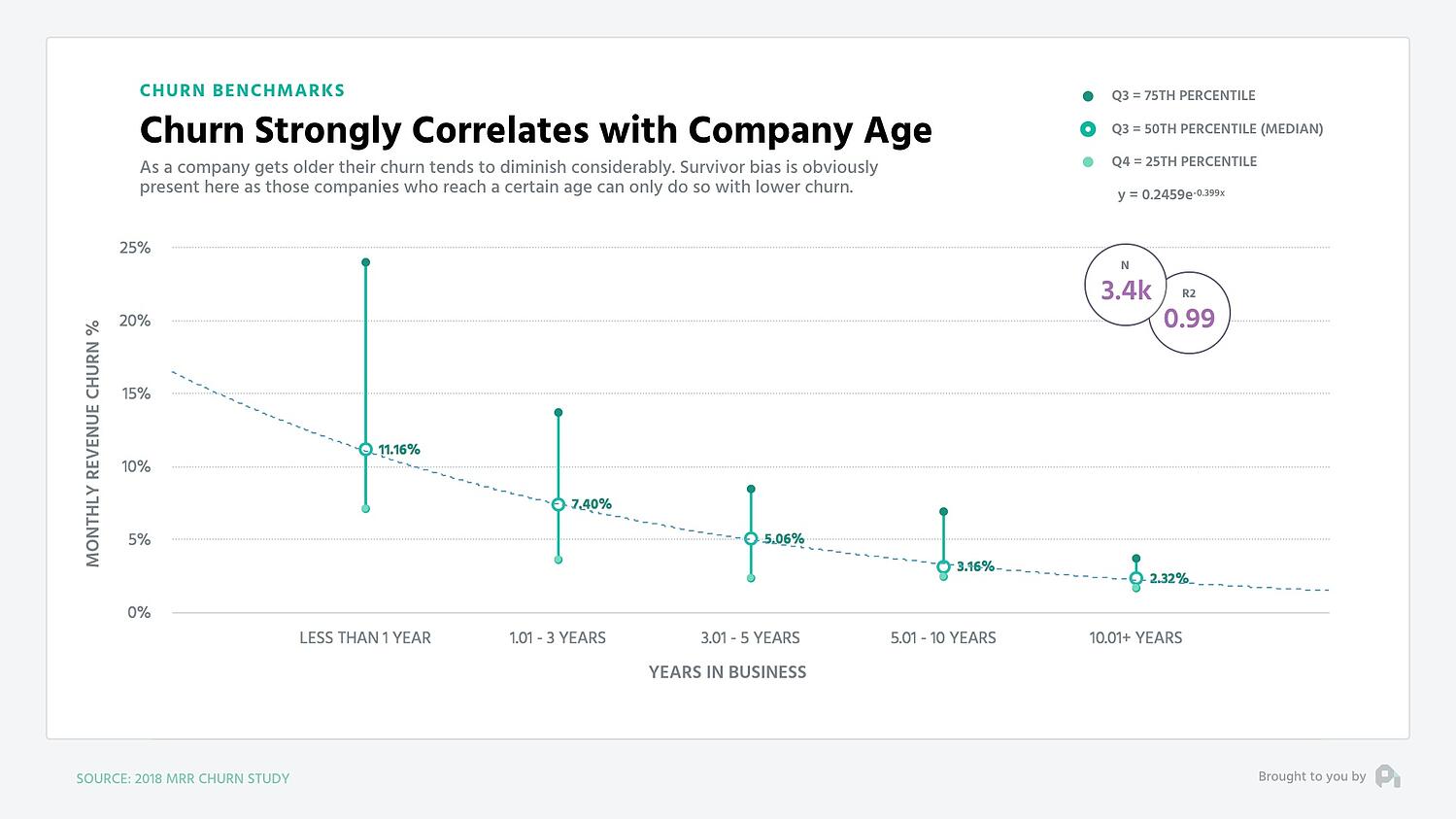 This makes sense because companies that aren’t able to get their revenue churn under control in the early years are more likely to run out of cash at some point.

Last but not least, Profitwell also measured revenue churn by average revenue per user (ARPU).  According to their data, the higher your ARPU, the lower your revenue churn. 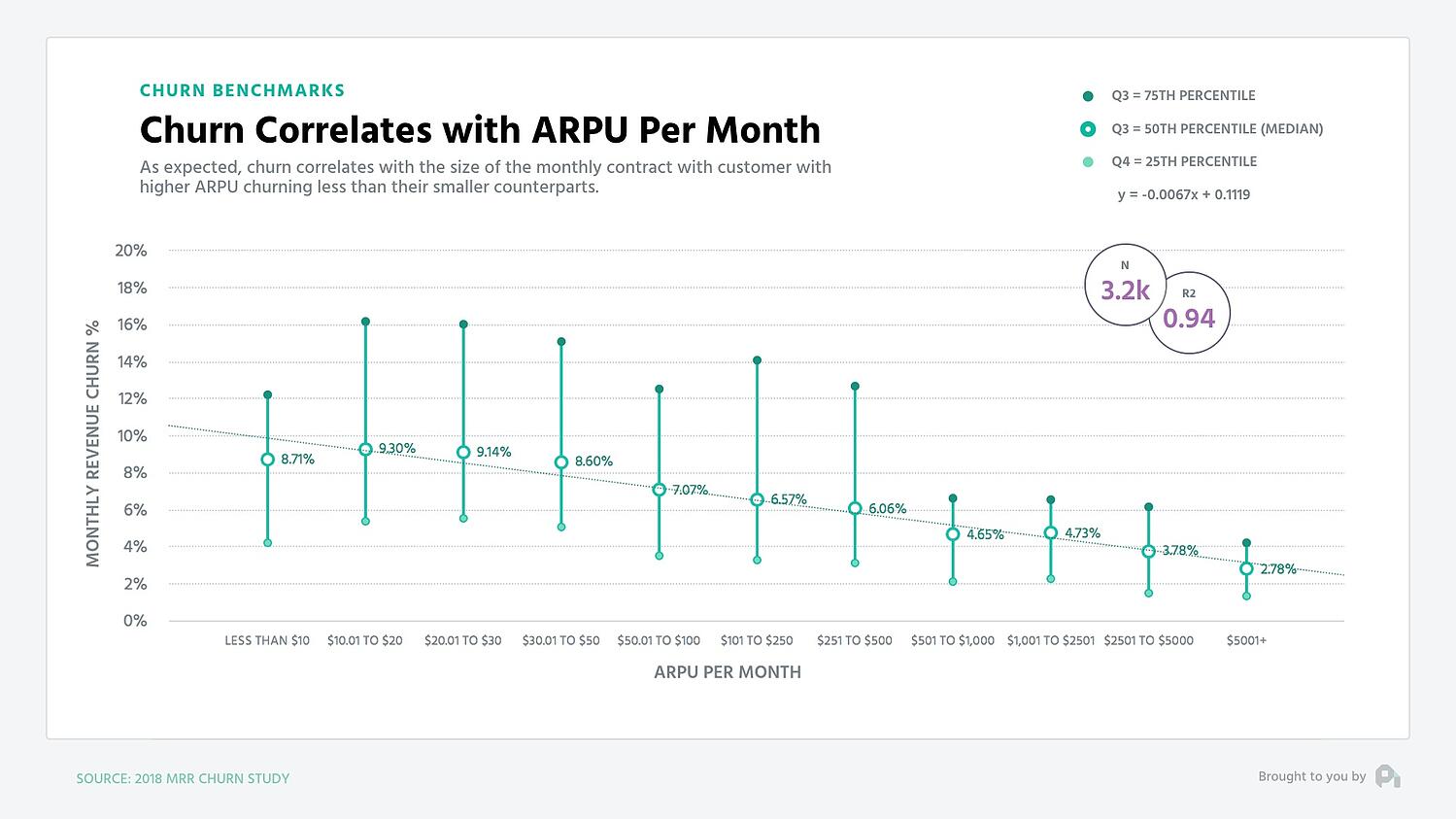 Baremetrics also has benchmarks based on their customers. Here’s what their data shows.

These numbers are far from the end-all-be-all. If your revenue churn is higher or lower than these benchmarks, it doesn’t mean you’re doing bad or good. Use these numbers as a general guide, but ultimately you should track your company’s performance against your own benchmarks.

How to Reduce Revenue Churn

Once you know what your revenue churn is, you can take steps to lower it. Less revenue churn means more MRR, higher customer retention and more stable growth.

Here are some tips to lower your revenue churn and retain MRR.

If you want to boost customer retention, providing amazing support needs to become a top priority. In fact, U.S companies lose more than $62 billion every year due to poor customer service.

Whether it’s responding to questions too slowly, not answering questions accurately or other issues, customers are willing to walk away after having a bad experience with your company.

Investing in customer support could include:

Essentially anything you can do to ensure your customers understand how to use your product and how to get the most value is part of customer success and may help you reduce revenue churn.

2. Try to Attract the Right Customers

It might sound odd, but everyone who signs up for your product isn’t the right fit. And when people subscribe to products they don’t really need or that don’t solve their problem, it can result in churn.

The best way to avoid this is to be clear about what your product offers, and who it’s an ideal fit for. That’ll increase your chances of attracting customers who are more likely to stay around long term, which reduces revenue churn.

When a customer wants to cancel their subscription, it’s not always the end of the road. You might be able to save some of the lost revenue.

Instead of having them completely cancel, consider ones of these alternatives:

These alternatives will result in some revenue churn, but not as much as a cancelation.

While you might not want to do this for every customer, it makes sense in certain situations. For instance, if one of your big ticket customers wants to cancel, it could be worth offering a slight discount instead of taking a 100% loss.

Some companies also offer these types of deals when they’re just starting out in order to build a customer base and gather initial feedback for their product.

Instead of only focusing on how to prevent customers from churning or downgrading, shift your mindset. Think of ways to increase the revenue you get from existing customers as well.

The three best ways to increase expansion MRR are:

(1) Upgrades: Get customers to upgrade to a higher priced plan. Ahrefs offers multiple pricing plans with extra features for the higher tiers.

(2) Cross-sell: Create complementary products you can sell to customers. Buffer offers an analytics product in addition to their flagship publishing tool. They cross-sell the analytics product to existing customers to increase expansion MRR.

While all these tactics can help you increase your expansion MRR, they’re not a substitute for decreasing your revenue churn.

Getting your churn as low as possible should be your main priority, but expansion revenue can help balance out some of the lost revenue.

And who knows, maybe you’ll even get net negative churn!

Stop Revenue Churn Before it Stunts Your Growth

If you don’t get control of revenue churn in the early days of your startup, it can not only slow your growth, but put you at a complete stop.

It’s not a coincidence that the companies that have been around for 5+ years have lower revenue churn than new startups.

If you want to see how your revenue churn rate will impact your growth trajectory, sign up to build a forecast with Finmark.